- Zone 3
A great pollinator, with an addictive taste

The Wealthy apple is very attractive in appearance with a bright red colour interspersed with small yellow dots. The flesh is white with pink veins. It is very juicy, crisp, and has a sweet and tart flavour reminiscent of strawberry. It is great for eating fresh as well as cooking. People often rate it as their favourite apple, many even say it is addictive! For eating fresh, let the apple go scarlet on the tree. For pies (Wealthy is excellent in pies), sauce (makes pink-cherry colour sauce) and preserves, it is better to harvest it a couple of weeks earlier. The fruit tends to drop at maturity. The Wealthy apple will keep for 3 months.

The Wealthy apple tree is an early, heavy bearer of fruit. If not thinned, however, it will only produce fruit every other year. It has a long, intense flowering period, making it a great pollinator of other apple trees. It has a good resistance to apple scab, fire blight and cedar apple rust. It is an excellent choice for home gardens. Let us tell you the touching story of the Wealthy apple. It all started in 19th century with a self-educated horticulturalist named Peter Gideon (1820-1899). Mr. Gideon learned the art of growing fruit when he was a child. In 1853, because of health problems, he moved to Minnesota. At this time, only crab apples would grow in Minnesota. Upon arrival, Mr. Gideon planted millions of apple seeds from his former home in Illinois at his new homestead. Not hardy enough for Minnesota, most of his trees died, while the others were unproductive.

Eight years later, only one of his apple trees survived, a Siberian crab apple. Despite this, Mr. Gideon and his family still had faith in the idea of growing apple trees in Minnesota. The times were hard and they had only $8 left. Although Mr. Gideon desperately needed a winter coat, he instead decided to send the money to an apple grower in Maine to buy a bushel of apple seeds (talk about faith!) One of those seeds made a tree hardy in Minnesota… and this tree pollinated with the Siberian crab apple… and Wealthy was born! Mr. Gideon named the tree after his wife, Wealthy Gideon. It was the beginning of the Northwest’s fruit growing industries. Half a century later, Wealthy was one of the top five apple varieties grown in the United States. Mr Gideon was a pioneer in Northern fruit growing, and it is an honour for us to propagate his heritage.

The illustration shows different stages of our apple trees growth up until the age of 20 years (as one rarely plans a landscaping arrangement with a longer time period in mind). At 100 years old, the apple tree will be even larger than shown here – it can reach 7 m in height and spread over 9m – while the house might no longer exist!

You should note that this illustration is meant only to give a general indication of what you can expect, and the growth of your tree might look somewhat different. The development of a tree depends on the soil type, irrigation, fertilisation and climatic conditions. What we show here is based on our observation of observations of the growth of apple trees in zone 4, in rather poor soil. In zone 2, growth will probably be slower, while in a rich soil it would be faster. 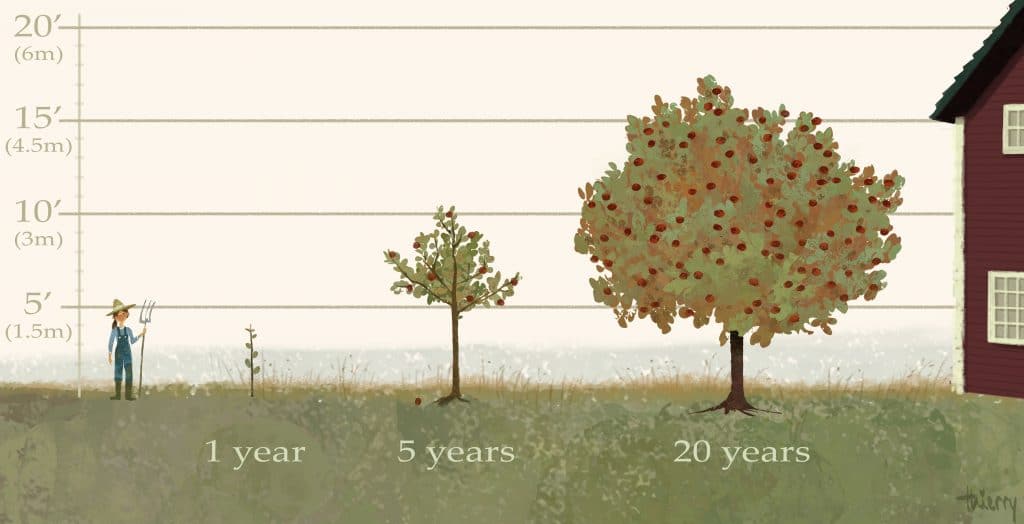 All our apple trees are sold bare-root, without pots. They have been cultivated directly in our soil. Bare-root trees must be taken out of the ground and shipped during their period of dormancy, which is why we only ship trees in the spring. A big advantage with these kinds of trees, is that they take up very little space, and can therefore be easily shipped by mail all over Canada!

This photograph shows a 2-3-foot apple tree, just like one that you might receive. Depending on the height you choose at the time of purchase, the tree might be a little smaller (1-2 feet) or somewhat taller (3-5 feet.) 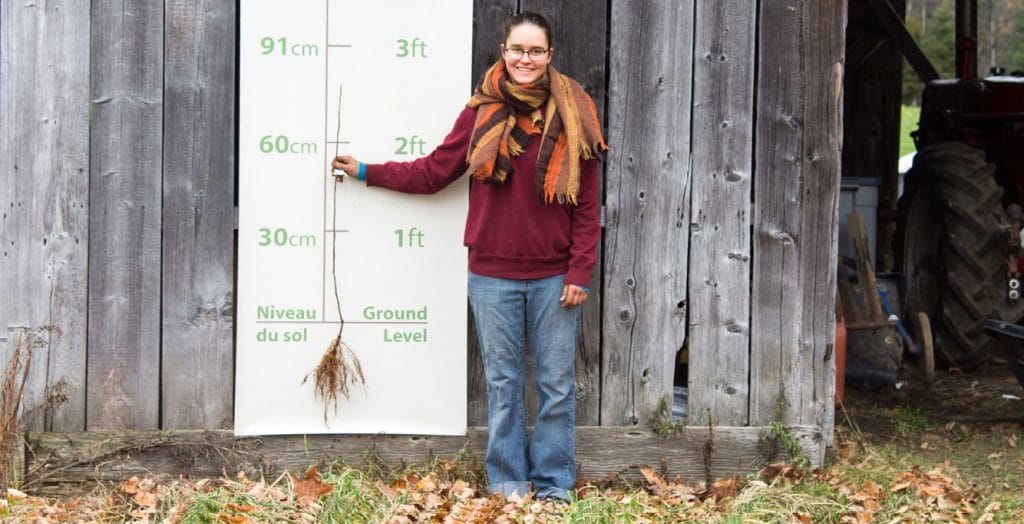 All our apple trees are grafted on standard-sized rootstock, which we grow ourselves at the nursery. Trees that are grafted on standard-sized rootstock will become full-sized apple trees (as opposed to dwarf, or semi-dwarf.) While the life expectancy of a dwarf apple tree is only about 20 years, full-sized apple trees such as those we propagate have a lifespan of around 100 years. We believe it is of the utmost importance to plant for future generations, which is one of the main reasons we prefer these kinds of trees.

Besides this, standard-sized apple trees also have many other qualities that set them above dwarf and semi-dwarf trees in our view. For example, their deep and well-developed root systems allow them to draw water from deep underground during periods of droughts. They are more vigorous and resilient, which in turn also makes them more disease-resistant. They are very hardy, and last but not least, much more productive!

To learn more about grafting and the role of rootstocks, see our article here! 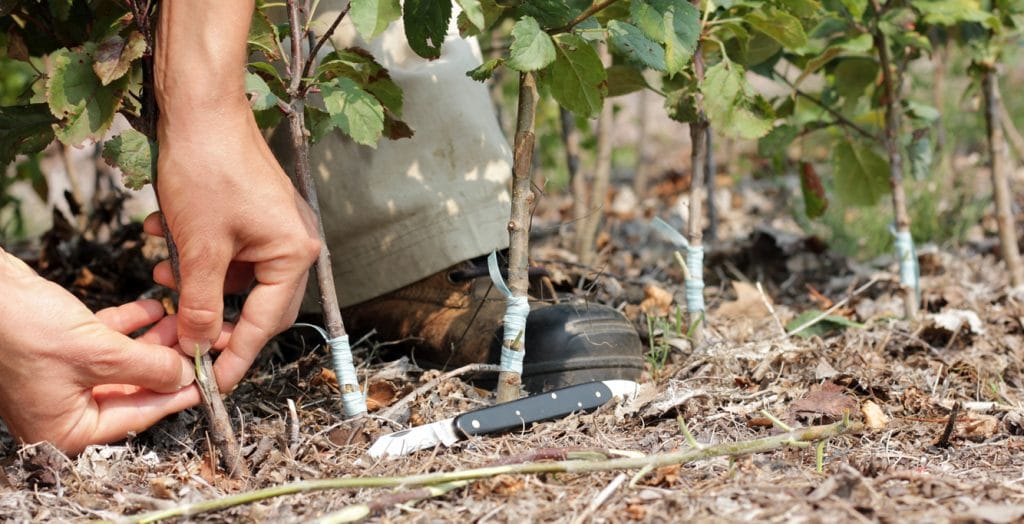