- Zone 3
The most dependable and reliable plum tree you can find!

Valton is one of the largest plums we offer, weighing around 50g on average. It has dark red skin, moderately thick with a little acidity. The flesh is orange, clingstone, and is very juicy and refreshing. You can definitely expect to have juice dripping down your chin while eating this plum! It tastes very sweet and aromatic, with some acidity close to the pit; perfect for eating fresh as a dessert plum. When fully ripe, it measures 21 Brix. Valton is harvested quite late in the season, ripening over a period of several weeks (a considerable advantage for plums, as you don’t end up with too many to eat all at once.) For us, in zone 4, the harvest starts around late August or early September, and continues through mid-September.

Valton is vigorous, resilient and without a doubt the most dependable and productive plum tree we have come across. It produces large (often very large) harvests each year. This tree also has good resistance to most major plum diseases. We have successfully tested it in Rivière-Rouge, zone 3, for several years, without it suffering any frost damage. Like most hybrid plum trees, Valton is self-sterile and will need to be pollinated by a Canada plum tree or American plum tree.

Here is the story of how we came to find this wonderful variety. It dates back to the time when Eric, the founder of the nursery, was just starting to collect an orchard of fruit trees, before the nursery as such began. One day he made a visit to Domaine Valton Osiris, in Saint-Mathias-sur-Richelieu: a small vegetable farm, also pioneering in organic grain production in Quebec. While he was there, a certain plum tree caught his attention: it was overloaded with magnificent red plums, so much so that the branches had to be supported with wooden planks to prevent them from breaking under the weight of all the fruit!

He learned that this tree had been selected by the founder of the farm, Pierre Valton, who at that time was bedridden and gravely ill. Given the state of Mr. Valton, who died soon afterwards, we were not able to obtain more detailed information on the origins of the variety, but we decided to baptise it ‘Valton’ in honour of its creator; a man truly dedicated to fruit trees and organic agriculture. Eric took a branch from the original tree, brought it back home and grafted it, and it was from this branch that we have since been able to propagate this hardy and productive tree for the whole of Canada!

Plums are fast-growing trees, but stay relatively small. A plum tree at maturity will not usually exceed 5 metres or 16 feet in height. Its life expectancy is also quite short: one can generally expect it to live between 30 and 50 years. This illustration shows a 20-year-old plum tree that has attained its maximum height.

You should note that this illustration is meant only to give a general indication of what you can expect, and the growth of your tree might look somewhat different. The development of a tree depends on the soil type, irrigation, fertilisation and climatic conditions. What we show here is based on our observation of the growth of plum trees in zone 4, in rather poor soil. In zone 2, growth will probably be slower, while in a rich soil it could be faster. 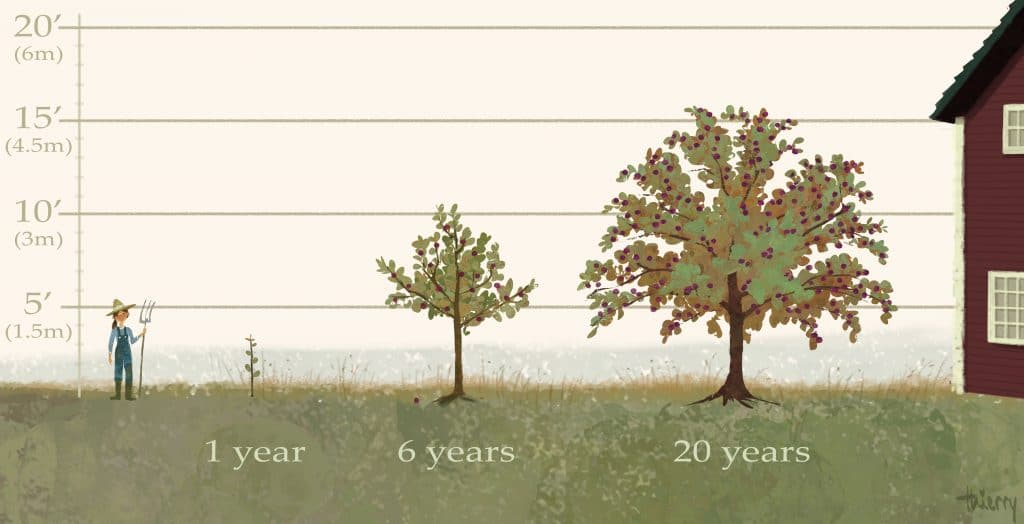 All our plum trees are sold bare-root, without pots. They have been cultivated directly in our soil. Bare-root trees must be taken out of the ground and shipped during their period of dormancy, which is why we only ship trees in the spring. A big advantage with these kinds of trees, is that they take up very little space, and can therefore be easily shipped by mail all over Canada!

This photograph shows a 2-3-foot plum tree, just like one that you might receive. Depending on the height you choose at the time of purchase, the tree might be a little smaller (1-2 feet) or somewhat taller (3-5 feet.)

Our plum varieties are hybrids of Canadian, American and Japanese plums. If you are thinking of planting a plum tree, it is important to understand how their pollination works. Hybrid plum trees are self-sterile, and cannot produce fruit alone. Moreover, they are not good pollinators for one another. Even if you plant two different varieties next to each other, you are unlikely to harvest any fruit. 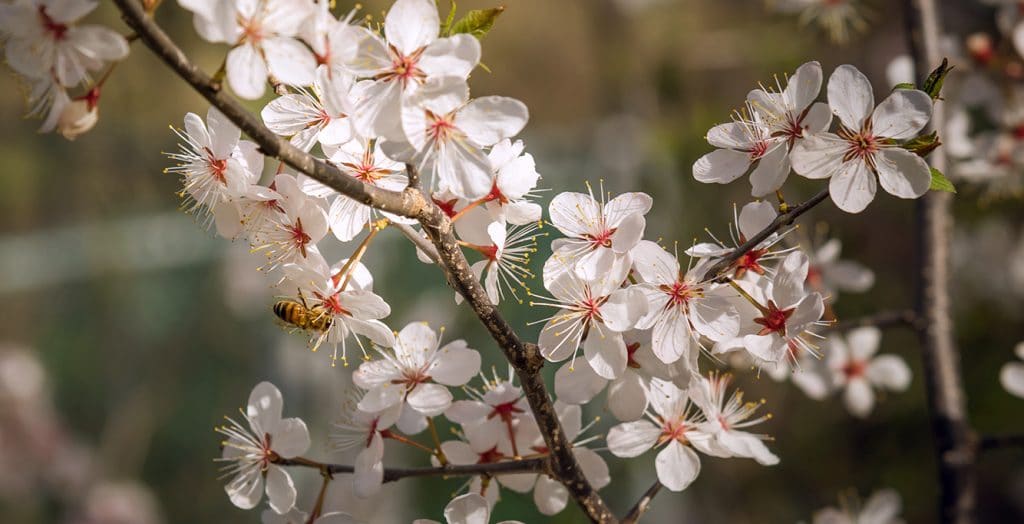 One drawback of plum trees is that they tend to flower early, making them sensitive to freezing in late frosts. Some microclimates help to mitigate this, such as the proximity of a lake or ocean. We also have a trick to help prevent them from flowering too early: applying a layer of mulch or compost underneath the base of the tree while there is still a good amount of snow on the ground. This insulates the snow underneath, so that it melts more slowly, and by maintaining a colder environment around the base of the tree, delays the start of its flowering period. 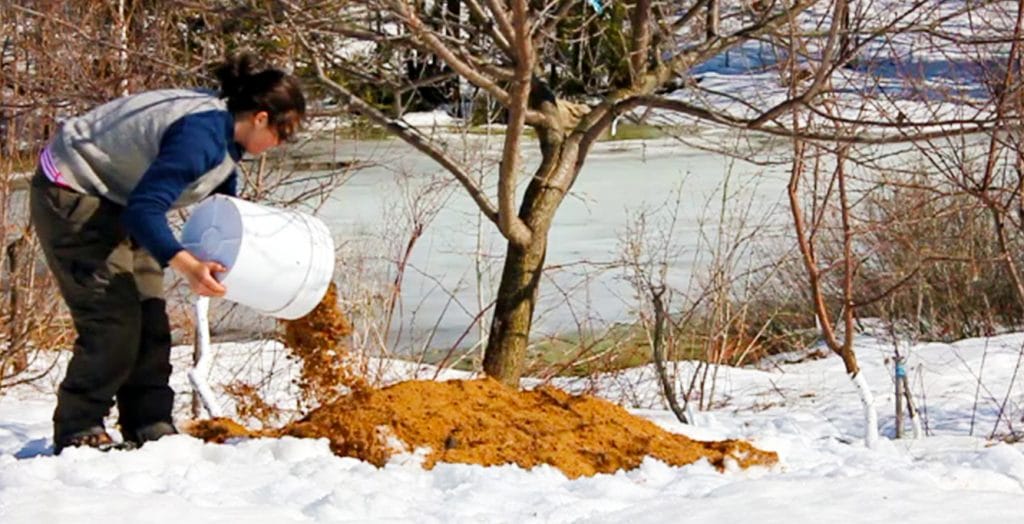