Maskinonge chokecherries are of a distinctly superior quality to most chokecherries that one finds growing wild over the country. They are dark purple in colour and on average about 12mm in diameter and 1 gram in weight. They are sweeter and much less astringent than most chokecherries. Their flavour profile is still somewhat astringent, and they will not replace sweet cherries from France. Nevertheless, they will make very good jams, jellies, and syrups and attract plenty of wildlife. Note these trees are seedlings, and therefore the fruit will vary slightly from one tree to the next. Its quality should still be consistently good, however.

The Maskinonge chokecherry is so called because of the region from which it originates; our trees are seedlings of chokecherries that we found growing in Maskinonge, Quebec. It is a fast-growing shrub or tree that stays generally quite compact, growing up to heights of 3 metres. It is extremely cold-hardy, (up to zone 2a) with a native range that extends across Canada from coast to coast, and through to the central United States. It will manifest as either a small tree or in northern regions more often a shrub, occasionally spreading up to 4 metres. Its lifespan is relatively short, around 40 years, but its suckering habit generally sustains the plantation well beyond this limit, without being invasive. The chokecherry tree is also famously adaptable, growing well in poor soil and all but the greatest extremes of wet and dry conditions. It will do their very best, however, in moist well-drained locations with plenty of sunlight. It is also highly tolerant of urban pollution.

These chokecherry trees produce consistent annual yields, and can be expected to begin bearing fruit about 3 years after planting. The fruit hangs on the outside of the plant for easy harvesting either by hand or mechanical harvester.

Chokecherries are often overlooked these days, but have a long history of use dating back to before European settlement of North America. They were a staple of aboriginal diets and subsequently those of the first settlers,’ thanks in large part to their abundance and culinary versatility. They make some of the very best preserves, jams, jellies, syrups, and fruit leathers; all the while delivering great nutritional value. The trees themselves also possess both ornamental and functional merit. As an ornamental they are very attractive plants, most valued for their extreme cold-hardiness with which other ornamental plants cannot compete. From a functional standpoint, their ability to thrive in nutrient poor soils and their extensive roots make them a great choice for land reclamation and erosion control projects. They can also be very effectively employed as a part of shelterbelt plantations. Beloved by wildlife, choke cherries will definitely attract a host of birds and mammals looking to enjoy their bountiful fruit and the protection of their branches.

Choke cherry is fast-growing. Depending on its growing conditions, it can grow either as a small, bushy tree, or a shrub. (Tending more towards a ‘bushy’ form in colder climates.) It will reach around 3 metres in height at maturity, with a similar spread. This illustration shows a 20-year-old choke cherry that has attained its maximum height.

You should note that this illustration is meant only to give a general indication of what you can expect, and the growth of your tree might look somewhat different. The development of a tree depends on the soil type, irrigation, fertilisation and climatic conditions. What we show here is based on our observation of the growth of choke cherry in zone 4, in rather poor soil. In zone 2, growth will probably be slower, while in a rich soil it could be faster. 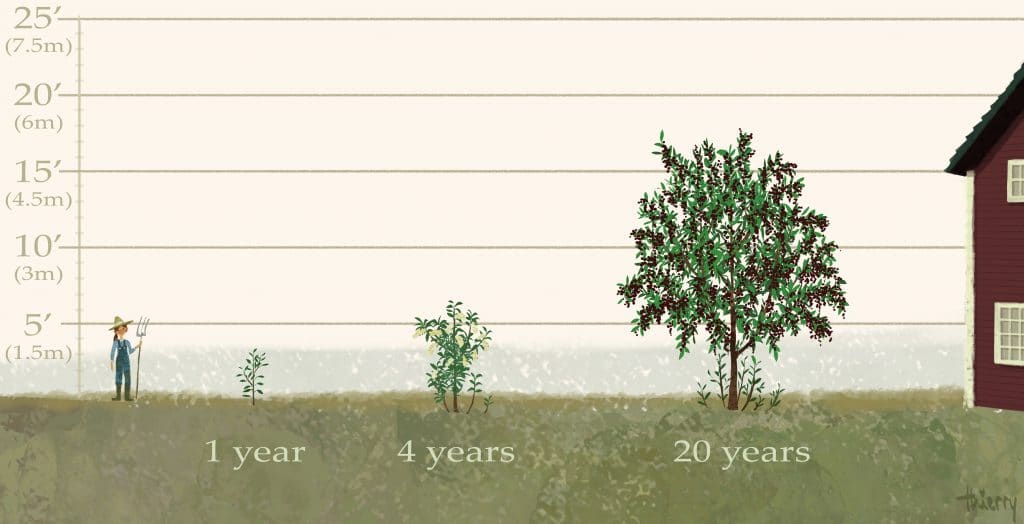 All our choke cherry trees are sold bare-root, without pots. They have been cultivated directly in our soil. Bare-root trees must be taken out of the ground and shipped during their period of dormancy, which is why we only ship trees in the spring. A big advantage with these kinds of trees is that they take up very little space, and can therefore be easily shipped by mail all over Canada!

This photograph shows a 3-foot choke cherry tree, just like one that you might receive. Depending on the height you choose at the time of purchase, the tree might be somewhat taller (3-5 feet). It might also be somewhat smaller (closer to 1 foot) depending on availability at the time of order preparation. 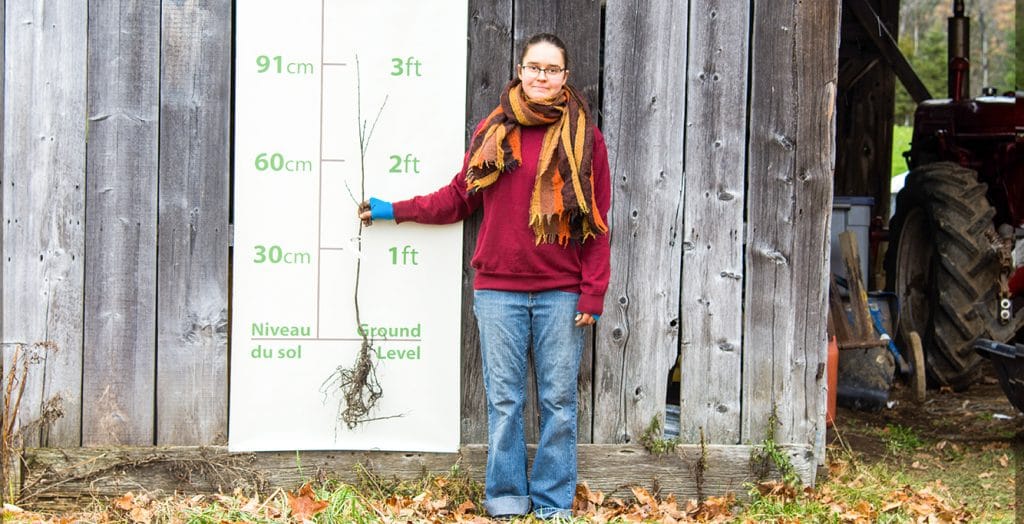