Boreal Beauty is a fat and firm haskap berry, with a rounded oval shape. It is larger than an average blueberry, weighing about 2.6g on average. It tastes acidic and sweet, with a fruity, almost strawberry-like flavour.

Haskap is loved for its early harvest. It’s one of the first fruits to be harvested in early summer. Boreal Beauty ripens at least two weeks later than most haskaps, around mid-late July or even perhaps early August, depending on the region.

That’s a plus, because it means that combined with another haskap cultivar, the harvest season is much longer.

They are very tasty when eaten fresh, but would of course also lend themselves to a wide range of uses in cooking and jams; having a very similar range of uses and applications to blueberries.

Boreal Beauty’s fruit shape is special. Occasionally one end is pointed, making some of the larger berries look heart-shaped.

Haskaps are medium-sized shrubs that grow in a rounded form, to a maximum of about 2.5 meters in height. They are very easy to grow: no suckering, no pruning needed for the first few years, tolerant to a range of soil conditions, and easy to harvest with no thorns.

Boreal Beauty is a very vigorous and productive haskap bush. It grows more quickly and becomes larger than the majority, and flowers later than most honeyberry varieties; around mid-May, but this also depends on your region.

Its branches are strong and upright, not bending under the weight of the fruit – an advantage for mechanical harvesting, if one wishes to grow them commercially.

Boreal Beauty also has excellent resistance to mildew, and is hardy to zone 2a.

It is important to note that haskaps are self-sterile, and need to be paired with a cultivar that flowers at the same time, in order to set fruit. The ideal cultivar to plant alongside Boreal Beauty would be Boreal Beast (whose name is not a coincidence, they are meant to be together!) The latter has a slightly longer flowering period, but both cultivars stop flowering at around the same time.

Boreal Beauty was developed by the University of Saskatchewan Fruit Program, where research into breeding new, hardy and productive Haskap varieties has been ongoing since the early 2000s.

It is principally the work of Bob Bors, together with Rick Sawatzky – passionate and dedicated fruit growers and breeders, who we have to thank for the development of many new sour cherry varieties currently on the market, as well as several new and exciting haskap varieties.

The work involved to develop these new haskap varieties included travelling to Japan, Poland and across Canada, as well as collecting seeds from many other sources, particularly Russia.

Haskaps or  Lonicera caerulea, have been known as Honeyberries, Blue Honeysuckle, and Sweet Honeysuckle.

Haskap, now the name most commonly used, also happens to be the oldest. It is the phonetic spelling of the name given to these berries by the Ainu people of the Hokkaido region in Japan. As far as we know, the Ainu were among the first to gather and perhaps cultivate them, in around the 13th Century.

Haskap berries are noteworthy not just for their hardiness and good taste, but for being an exceptionally nutritious fruit. Their level of antioxidants is among the highest of any fruit or berry, about 50% more than that of blueberries.

They are comparable to oranges in terms of Vitamin C content. They rival the banana for potassium, and also contain high levels of other minerals including calcium and magnesium.

Haskaps are medium-sized shrubs that grow in a rounded form, to a maximum of about 2.5 meters in height. They are very easy to grow: no suckering, no pruning needed for the first few years, tolerant to a range of soil conditions, and easy to harvest with no thorns.

Optimal spacing is 1.3 meters between plants. To make a hedge, plant them 1 meter apart. 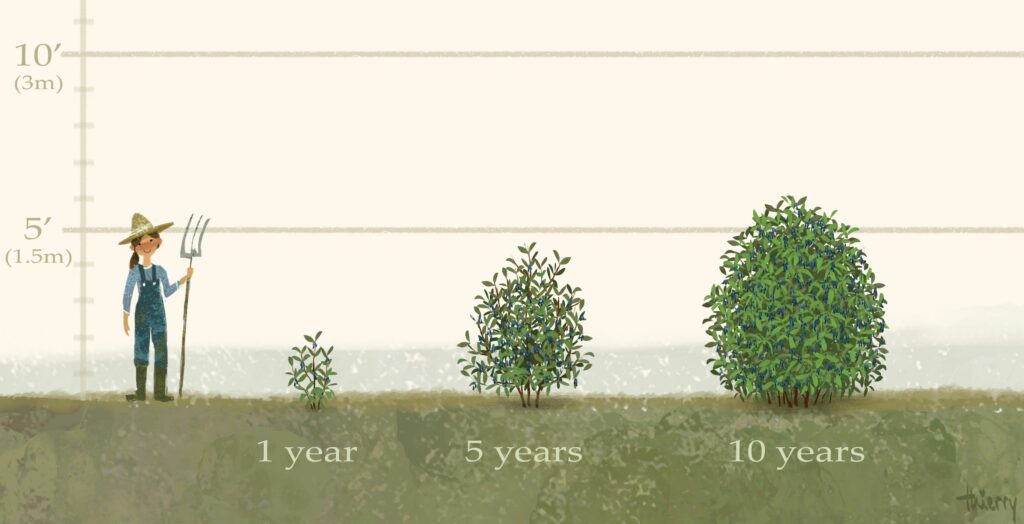 This haskap variety is subject to a propagation license, meaning that only licensed nurseries may propagate and distribute these varieties. We have applied for a license, but have so far not been able to gain the necessary rights.

However, since these are generally agreed to be the best varieties available, we really want to make them available for you. Therefore, as a rare exception to our general rule of only selling what we grow from scratch ourselves, we are working with a local licensed supplier who propagates them in vitro (which ensures they are virus free).

We then grow them 1.5 years in our field and make sure they are doing well, before we sell them to you.

Our haskaps are sold bare-root, without pots. They have been cultivated directly in the soil, and are taken out of the ground to be shipped to you during their period of dormancy. Bare-root trees do not take up much space, and can be therefore shipped by mail all over Canada!

This photo shows a 2 to 3 feet tall Haskap plant, similar to one you would receive. Depending on the height that you select when you order, it could be smaller. 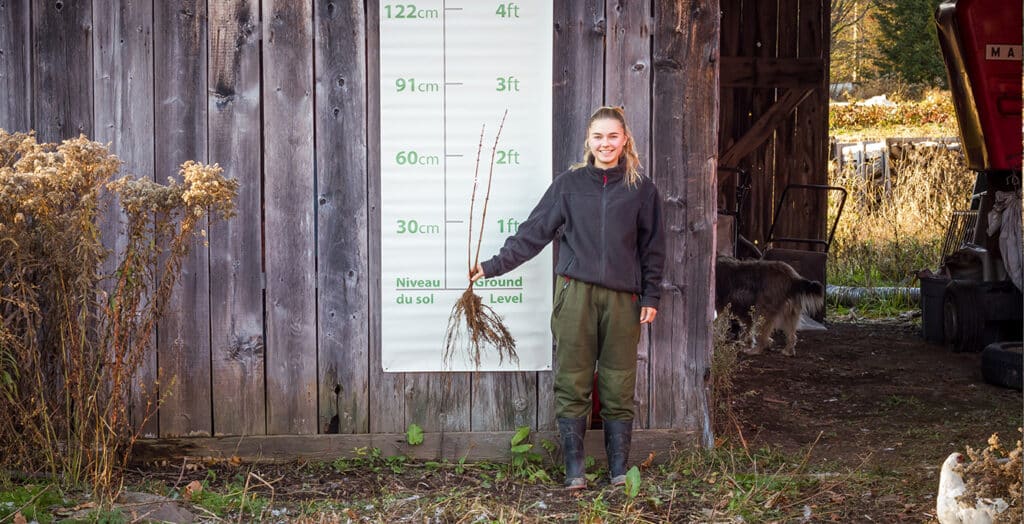 This research led to tremendous improvement in the quality of the Haskap berry, compared to what we could get before. We tasted these four cultivars and selected the two best in our opinion: Boreal Beauty and Boreal Beast. 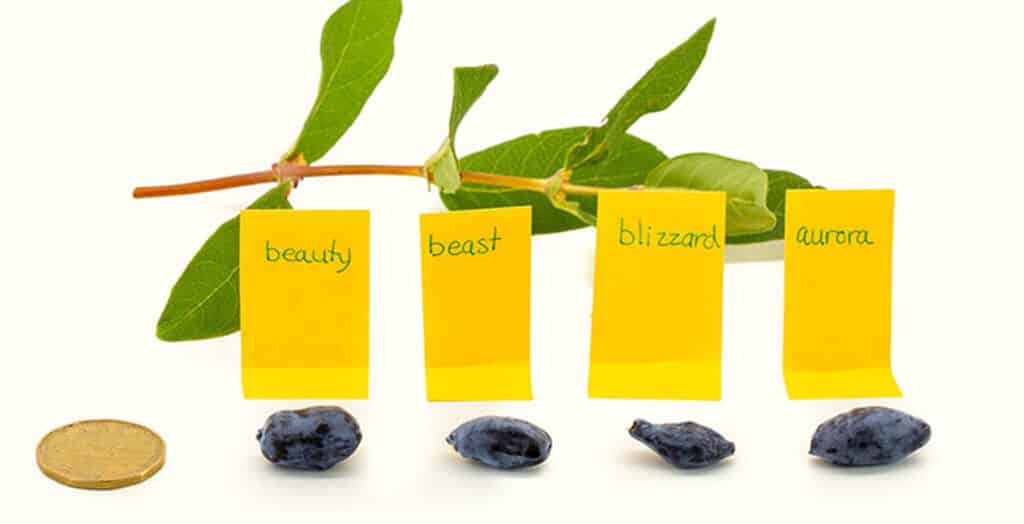