The American chestnut tree generally begins to produce nuts at around 8-10 years old. The chestnuts grow in clusters of spiny green husks, each containing about three nuts. They mature in late September or early October, and begin to fall to the ground when they are ready to harvest.

The nuts are easy to collect, as the husk opens up when they are mature – but know that all animals love them just as much as humans do, so ‘harvesting’ is something of a race as to who gets to them first.

These chestnuts are a little smaller than the European sweet chestnut, measuring about 2.5 cm in diameter; they are, however, equally tasty. Their texture is soft, unlike that of an ordinary nut – almost like a sweet potato that grows in trees! They are generally roasted in the oven or boiled, and can be used in meals, as a snack or as in desserts.

The American chestnut tree (Castanea dentata) is a fast-growing tree that once covered most of North America, but is now critically endangered in its native range. It can, when healthy, grow up to 30 metres in height, with a trunk of 3 metres in diameter.

The chestnut tree produces male and female flowers on the same tree, but cannot self-pollinate; it requires at least two trees for pollination and nut production to occur. With pollination, it produces heavy annual yields of chestnuts.

Historically, these nuts were a major food source for humans and various forms of wildlife alike. The American chestnut also contributes to maintaining the fertility of the soil in which it is grown, as its leaves retain higher amounts of nutrients than most other forest trees.

In the past when it was readily available, the tree was highly valued not only as a source of food, but as a source of lumber. Its timber had many desirable qualities, among them strength, straightness, and resistance to rotting.

In the early 1900s, the native population of American chestnuts was almost completely obliterated by chestnut blight, which was introduced on imported Asian chestnut trees, themselves having resistance to the disease, which the American chestnut lacked.

Within a short space of time, this tree went from one of the most common trees in the eastern United States, to being practically extinct there. There are still some populations of it that are able to persist beyond its native range, where the disease has not reached.

Work has been ongoing for several years to find a way to save it, by a combination of breeding with partially resistant strains, and more recently, genetic modification to create a resistant strain. (Our seedlings are not genetically modified, they are pure American chestnut originating from trees on our land, see below).

Planting an American chestnut, particularly in areas outside its native range, helps contribute to keeping the population alive, as the more diverse seedlings are planted, the better the chance that some among them will be resistant to the chestnut blight.

Origin of our seedlings

Our seedlings originate from a number of trees on our land, which we obtained from a friend and nurseryman in Joliette, Quebec. They have been growing vigorously in zone 4 for over 15 years with no problems of disease or frost damage.

The American Chestnut is a fast-growing tree. When it is healthy, it can grow very large: up to 30 metres in height with a spread of over 7 metres in diameter. This illustration shows a 20-year-old Chestnut tree that has not yet reached its full potential height.

You should note that this illustration is meant only to give a general indication of what you can expect, and the growth of your tree might look somewhat different. The development of a tree depends on the soil type, irrigation, fertilisation and climatic conditions. What we show here is based on our observation of the growth of chestnut trees in zone 4, in rather poor soil. In zone 2, growth will probably be slower, while in a rich soil it could be faster. 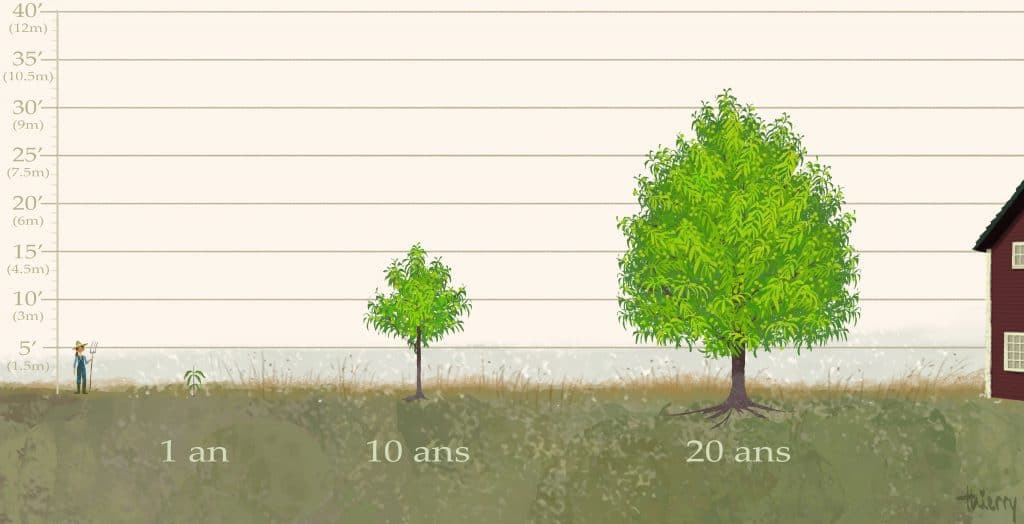 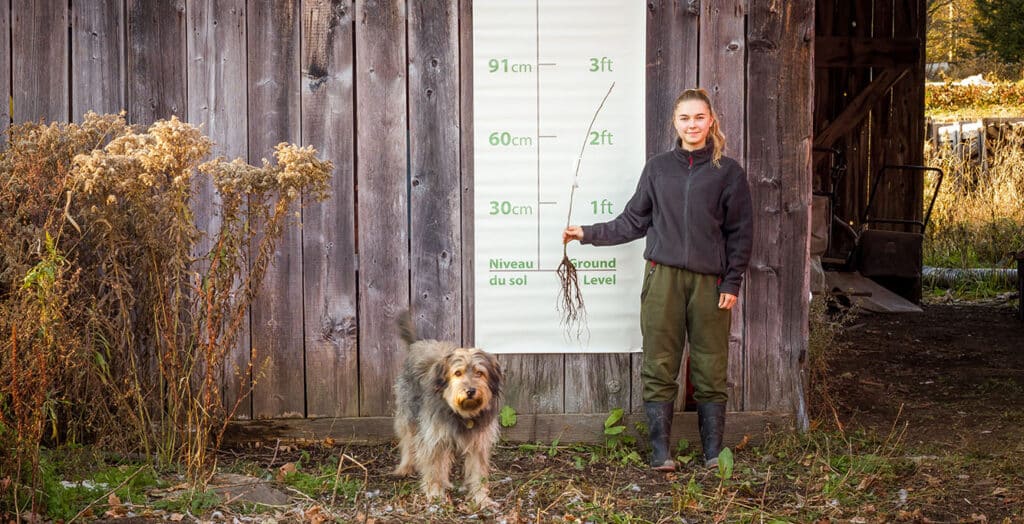