This nursery was not born with a business plan or a loan from a bank. In fact, its existence is almost an accident. It could be said that the first spark that foretold of a future nursery occurred in 1975, when a young boy named Eric de Lorimier, then in third grade, chanced upon a picture illustrating the word ‘grafting’ in an illustrated Larousse dictionary. No more was needed to pique the interest of a future nursery-man.

The young Eric lost little time in experimenting with grafting fruit trees, equipped with electric tape and large mature branches – complete with leaves and fruit! He was decidedly lacking some rather essential knowledge, and needless to say these first attempts were unsuccessful; but his interest was in no way dampened by his failures. Only later, on becoming old enough to travel to Montreal and visit the library in the Botanical Gardens, did he come across a document that gave him the detailed explanation he needed to understand how to succeed in the art of grafting. (There was, let us remember, no internet at that time!) Armed with this knowledge, he made his first successful graft at 18 years old, on his neighbour’s wild apple tree in Rawdon.

The orchard that began with three broken trees 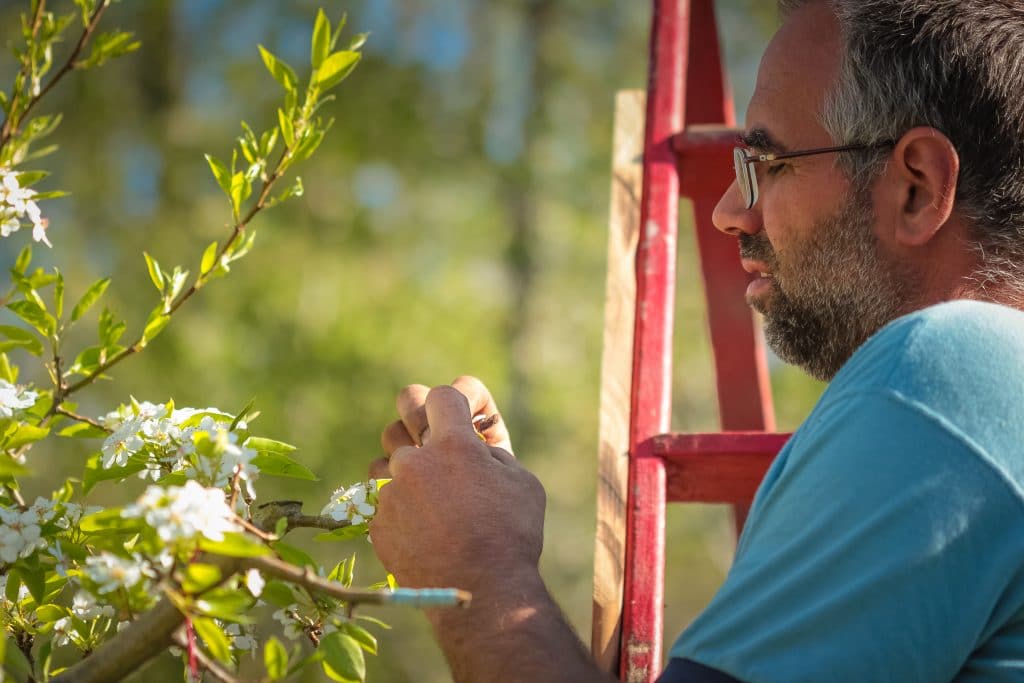 It was not until 1998, life having sent him in different directions in the meantime, that Eric decided to construct a log house in Sainte-Julienne, in Lanaudière close to where he grew up, and wished to plant some apple trees there. None of the apple cultivars that he found in local garden centres were cold-resistant enough for winters in Sainte-Julienne, zone 4; where the temperature dropped to a record -47°C during one of Eric’s first winters there.

After several weeks of research, he discovered a nursery in Manitoba offering cultivars that had proved themselves in extremely tough winters. Full of enthusiasm, Eric spent his entire meagre budget in ordering three apple trees. On finally receiving by mail the package containing his hope for a future apple orchard, he discovered to his dismay that all the trees were broken… an event which served to renew his interest in grafting, forgotten since his teenage years.

With three broken apple trees to graft, Eric went in search of suitable rootstock. Finding a few wild crab apple trees on the roadside, he dug them up, brought them home and grafted the buds of his damaged apple trees onto them. His grafts succeeded, and he found himself with ten apple trees rather than three! This was the start of Eric’s apple tree collection, to which he added new cultivars each year to test their cold-hardiness in the climate of zone 4. Gradually, through word-of-mouth over the years, neighbours and some members of gardening groups began to take interest in Eric’s trees and his collection, and he began to exchange, give and even sell a few of his trees. It remained at this stage very much a hobby, and the exchanges of trees and scion wood allowed him to expand his orchard.

In 2007 Eric met Véronique, who would become his business partner. They met at the home of Yves Gagnon, a pioneer and educator in organic agriculture, where Véronique was doing an internship in horticultural production. While Eric was top-grafting a ‘John’ pear whose fruits were atrociously astringent, he told Véronique about the story of his life, his passion for fruit trees and his multiple self-sufficiency projects in Saint-Julienne. This brief introduction sufficed for Véronique to become interested in taking part in these projects, and she moved to stay on Eric’s land that same summer.

When what had been a solo endeavor becomes a shared effort of two people, it can develop much more rapidly. The nursery, which began as Eric’s hobby, was one example. At the time that Véronique began working with him, the demand for northern fruit trees was already very strong, with many people longing for home-grown fruit all over northern Canada. Slowly but surely, Eric and Véronique began to select the best cultivars from the orchard for propagation, to be able to offer gardeners the chance to plant trees that would survive at their home. With a tiny budget, they worked with their hands, shovels and hoes. 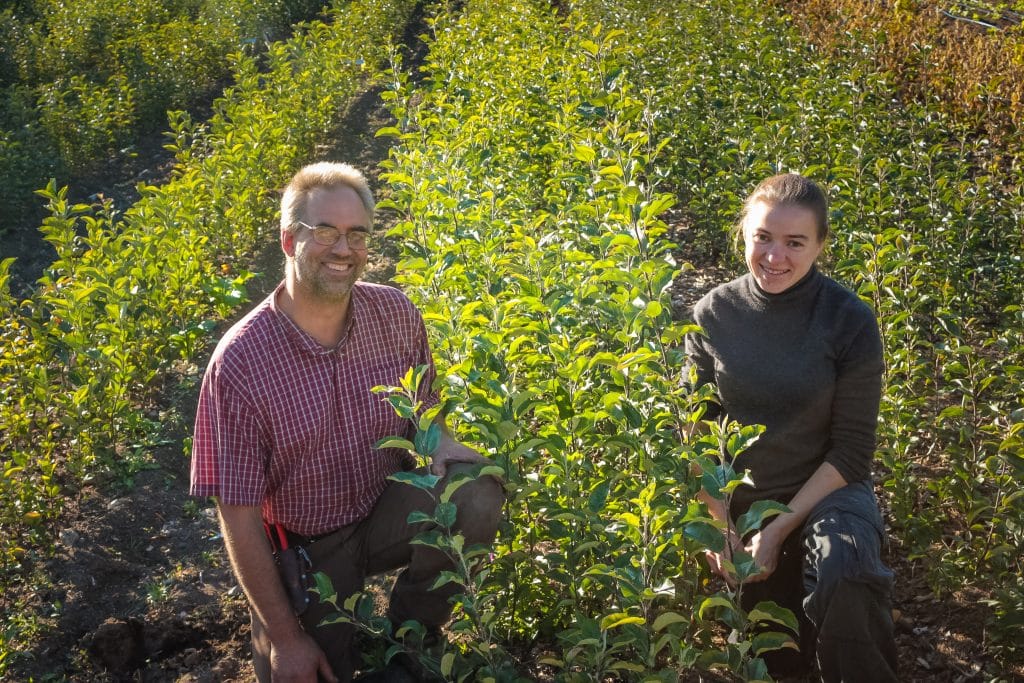 The nursery starts to grow…

It was not until 2013 that this small and very much artisanal nursery began to open to the public. The initial idea had not been to create a large-scale nursery, but simply to produce a few hundred trees in spare time. However, not long afterwards, Eric and Véronique met Mars at a fruit tree conference. Mars was then a young tree-trimmer, who asked if he could come to help in the orchard for two days, in exchange for Eric showing him how to prune fruit trees. Finally, he too decided to join this small venture. Mars was undoubtedly a lover of nature and trees, but also machinery… gradually, he started to integrate a mini 15 horse-power tractor, and a planting machine behind it, then a slightly bigger tractor… It was in this way that we began to mechanise our methods of cultivation, albeit in a modest way.

A community is built

A short time later, we received one day an email from an agronomy student, wishing to come for an internship at the nursery. We accepted, not imagining that this small decision would have such a great impact on the direction of our lives and our nursery. Our first experience with ‘wwoofing’ or long-term volunteers was enriching for both ourselves and the volunteer, and we decided to open our doors for others to come and stay at the nursery; where they could experience a different kind of life and leave with a larger range of knowledge.

Since then, we have welcomed more than 300 ‘wwoofers,’ to work with us and learn. They learn about trees, to be sure, but also diverse range of subjects including vegetable gardening, construction, conservation of foods, soap-making, bee-keeping and chicken-keeping, bread-making and self-sufficiency in general. Among these, a few fell in love with the place and its way of life to the extent that they, too, wished to remain on a long-term basis. It was in this way that Élisabeth, Matthew, Natalie, Eva and Camille arrived. We believe for both trees and humans, resilience is an indispensable quality to possess. The nursery became, in all its resilience, a small, almost self-sufficient community. Projects here abound and grow according to the motivation of the individuals who undertake them and join their effort to make them work. 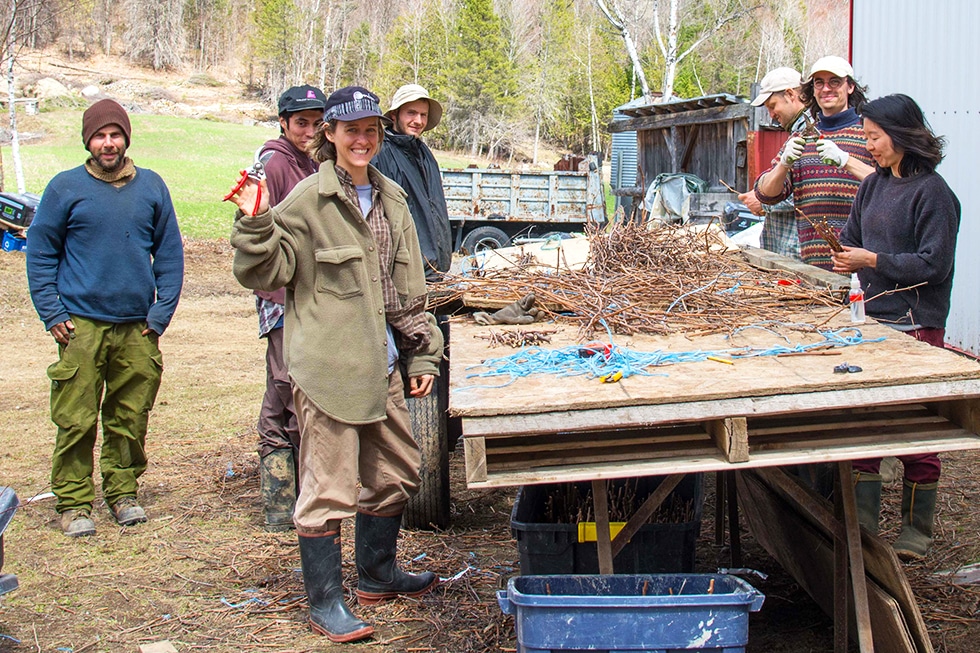 The move to Rawdon and the nursery today

After a few years, the small field of half a hectare in Sainte-Julienne was no longer able to accommodate our ever-expanding fields of saplings and orchards! In 2017, the nursery made a leap and moved 10km further north. Now with 10 hectares to carry out our many projects, Hardy Fruit Tree Nursery continues to develop. It embodies always the same mission with which we began: namely, to see fruit trees grow all over Canada, even in those regions which have been considered totally inhospitable to the growth of fruit trees. Our dearly-held wish is to never again hear the phrase ‘Fruit trees just don’t grow here.’

Our trees grow as far as Kuujjuaq, in Yukon, in Northern Alberta and in the Northern Territories. Recently, we even sent several hundreds of trees to Mongolia, for the test phase of a local project in food autonomy. There are truly fruit trees that can grow everywhere – you just need to choose the right ones. 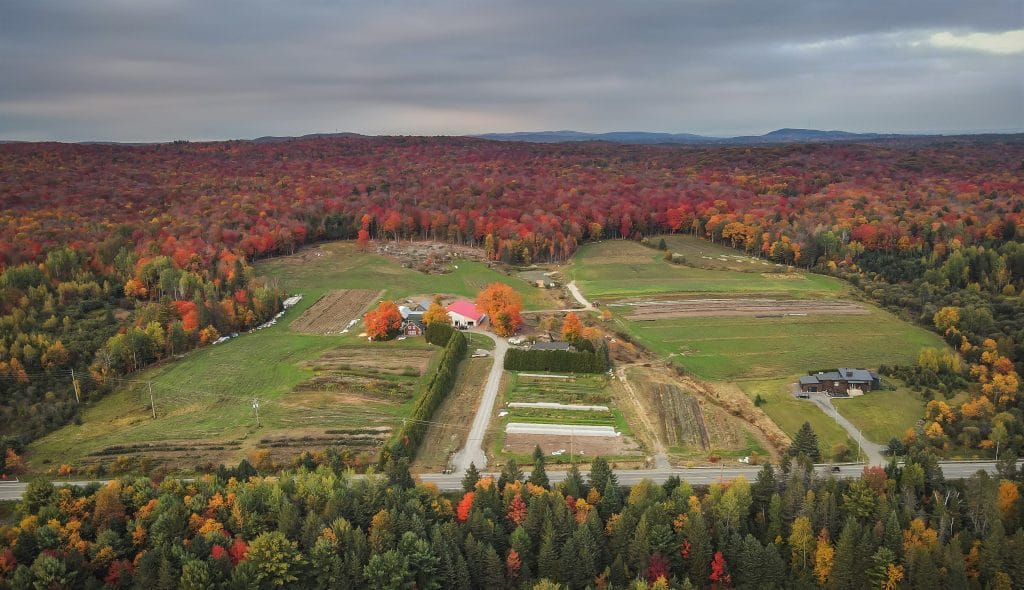